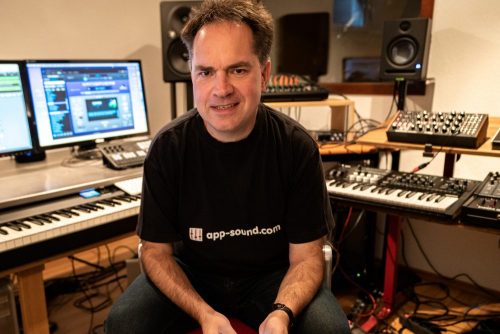 The creative mind behind App Sound is Matthias Sauer. He is a sound- and music producer from Germany, located near Frankfurt. You can hear some of his presets in the synthesizer workstation YAMAHA MOTIF, in the groove boxes AN/DX200 and further YAMAHA instruments. Since the early 90ies he collaborates with Peter Krischker (Easy Sounds) and released with him many sound sets, among them the successful sets „Chill Xperience“, „Nature of Chill“ and „Energy“ for YAMAHA MOTIF series.

Matthias created factory banks for popular software synths like PREDATOR and BLUE-2 by Rob Papen. He contributed a sound set for SUNRIZER SYNTH by Beepstreet. For KORG Japan he produced factory demo songs for the iPad apps KORG iPolysix and KORG Gadget.

Last but not least he is using his presets for own music projects. Search for Citrus Jam, Retro Rider or Sofa Sweeper in your MP3 store or streaming portal. As a freelance journalist he regularly writes articles for the German press on music software and instruments: for example the Apple iPad workshop for the magazine tastenwelt, reviews for Beat magazine and the online magazine Bonedo.